The pursuit of a better version of one’s self is at the heart of Maxime Testu’s practice. Taking his personal experience as a starting point, he adresses the elephant in the room – or rather the one that crowds his own mind – and studio – on a daily basis: how can he, as an artist, live up to the myth of the isolated creative genius producing groundbreaking art? Should one even subscribe to such lofty narratives?

His work is as subtly ironic as it is seriously eye-opening, and deeply relatable. It offers a figurative take on the haunting awareness that one can always do better, be better, whilst affectionately mocking the sense of impending doom that is so pervasive in the current zeitgeist. Perfection cannot be reached, and that is our common curse. Stripping the human figure of social constructs like gender, wealth and identity, Maxime Testu invites us in a liminal visual space where the subject is barren, taking us straight to the essential: the skeleton is the incarnation – minus the flesh – of the artist, of the sportsman… ultimately of the soul at work. Drawing his inspiration from iconic neo-expressio- nist painter Philip Guston and from the father of illustrated satyre Honoré Daumier, Maxime Testu resorts to the practice of etching to create his allegoric self-portraits in isolation, referring as much to the recently imposed lockdown we endured collectively-and-alone, as to his experience with self-discipline more broadly. His etchings (10x20cm) are little windows into the intimate and conflictual realm of solitude. His delicate skeletal figures are revealed in what can initially seem anachronistic postures – they are checking their phones in bed, watching movies, sending emojis to each other and protesting for equality online.

What Maxime is really doing is bringing these characters from a bygone figurative era to the forefront of our hyper-connected 21st Century social experience, brilliantly bridging the gap between the slow, reflective practice of etching and the current obsession with frenetic, immediate creation and communication. Our contemporary visual culture is brought to terms with the timelessness of these figures.We can all recognise ourselves in their forever tragic rickety pursuits.The notion of self-discipline and work on one’s self, which is at the heart of his etchings is also the starting point for his sculptures: his characters all seek refuge in a closeted space to better themselves. In the case of the sculptures, the closet is not the studio but the gym, where one is lured to cultivate the body with the unspoken promise of saving the soul.

Maxime Testu became fascinated with the evolution of the social status of the gym, going from its -quite literally closeted beginnings as a safe-haven for gay men in the late 1970’s- to a much more public performative space where we are made to take part in a somewhat absurd spectacle. We find ourselves, as gym goers as much as viewers of his sculptures, catapulted into this highly aesthetic and performative ecosystem where each of us is as fascinated by others’ bodies, as much as made aware of our own. It was exquisitely ironic for him to place these flimsy skeletal silhouettes in this context, which is so obviously dedicated to life, muscle and flesh. By associating the dissonant visual vocabulary of skeletons and death with the energy evoked by the gym, Maxime Testu reminds us that despite how we present ourselves socially, outdoors, we can all recognize ourselves in these these perfect bone constellations, these fears and secrets, which are the scaffolding that structure the softness of our bodies.

Whether we like it or not, “skeletons r us”. 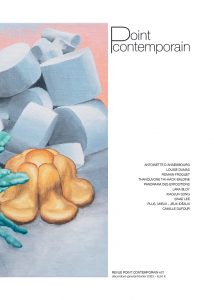